SaviLinx opened its doors in June 2013 with a handful of employees. In 2016, eight of the original team remain; these profiles of the “Original Eight” are to celebrate the company’s third anniversary. Chris Schofield joined SaviLinx from a career in hospitality. He is currently a Team Lead overseeing a seven-member team.

How did you learn about SaviLinx?

I visited the Maine Career Center in Brunswick on the same day that Heather and Lindsay posted the hiring announcement for tech support. I was a techie at heart, and had built a couple of computers. Plus, I had call center experience so I checked it out. 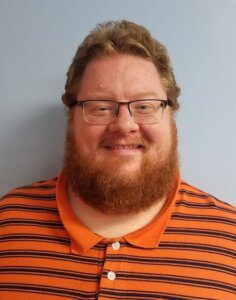 What was it like to work for a startup?

There was a mix of anxiety and excitement. The anxiety was based on fears of working in something new and unpredictable. And the excitement was because we were working in something new and unpredictable. It was definitely different. I had always worked for established companies. I was asking myself, what did I get myself into, but I just felt like it was going to be ok and I could contribute in a way that I had not before.

We were working in a decommissioned Naval base – picture the 16 of us in this huge space. Parts of our building looked like the Navy had been working there just the day before. Some spaces were locked in time. There was the NATO vault at the rear of the building. And there was a special lock where I imagine a Marine once stood on guard. And inside there is a cinder block room with a red phone and filing cabinets marked top secret and pictures of squadrons on the wall.

Totally unique. It made the job really cool.

What do you remember most about those first few months?

We had to absorb a lot of information. We learned a lot in the first two weeks of training and then we hit the ground running. We had two contracts, one was more technical and the other more customer support. Every day we were learning as we served customers.

But the volume wasn’t huge right away so I learned things that I may not have in another call center. It was great. I learned about the back end of DSL, and how it’s all sound based and how sound works. It was really interesting.

It also allowed us to get to know one another. And so today, when I see any of the people who I worked with at the outset, it’s like we are old friends. We just pick up where we left off. I think that was really unique opportunity for all of us.
It’s been buy clomid online uk paypal said that the Original 8 helped set the foundation for the growth today. What do you think?

I like hearing that. I like knowing that I had a role in the company’s growth, and that I have grown with it. I started with the Super Queue. We all did. Then in July 2015 we acquired a temporary contract for Quality Assurance. The company kept us on, so today I oversee a team of seven people. I like knowing that our work helped move the customer from a temporary to a permanent contract.

And, I am really happy that I started in the Super Queue because it taught me to be ready for anything. You have to instantly figure out a problem, without the customer realizing that you don’t yet have the answer. We have had up to 11 contracts in the Queue at a time. We spoke with all kinds of people, state and U.S. senators included.

A lot has been said about the culture. Is it really as good as people say it is?

Absolutely. It’s 100 percent the biggest reason why I stayed. My wife works here, too, as well as my brother-in-law.

I like that we have this window to the world. We have these big bay windows and we get to watch the planes – big private jets and more – coming in and out of the airport. And when the Blue Angels were here, we were all able to come out to the hangar and watch them. That’s not a perk available at most jobs.

It’s really nice to be able ride into work together. Other than maybe having lunch together, we don’t see each other until the end of the day. When she started to work here, we made a rule that we would only talk about work until we arrive home. We tend to get it all out as quick as we can. We both really enjoy what we do, and we are able to enjoy our time away from work.

And what’s changed since you started?

It’s a lot different now. I like having the memories of the emptiness in the building from when we started. And now it’s exciting to watch the pods filling up. We are seeing places in the building that have never been used here, being used. And that is a good sign.

What’s your outlook for SaviLinx?

We have a great team. And the current growth is a great opportunity for those people who have been patiently waiting to grow, too.

I am working right now on my degree in accounting. And when I get my degree I hope to move into a finance role in the company. SaviLinx has been great in supporting my continuing education.