SaviLinx opened its doors in June 2013 with a handful of employees. In 2016, eight of the original team remain; these profiles of the “Original Eight” are to celebrate the company’s third anniversary.

What prompted you to look for work with SaviLinx? 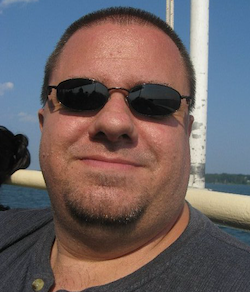 I had been out of work for more than three years. When my daughter was born she had health issues, so I was a stay at home dad. I stumbled onto this job by accident – SaviLinx called to do a phone interview with my wife Tanya, and she wasn’t available. But Lindsay (Wiers, the SaviLinx recruiter) told me about the position and asked me to take the pre-job testing. Lo and behold I was hired. I hijacked my wife’s interview, but she joined the company a few months later.

What was it like coming back into the workforce after that length of time?

Coming back into the workforce after the three and a half years was definitely a bit of a shock. As a stay-at-home dad, you don’t get dressed up. So when I went for my in-person interview, I was wearing shoes I hadn’t worn for three years. I didn’t realize that they had seized up from not being worn for a very long time. They literally fell apart during the interview. It was one of the most memorable interviews Lindsay had. She calls me the Man with No Sole! When I started, I wasn’t really sure what to expect. But I picked up the job quickly. I have a degree in computer science, and that helps especially when I do tech support contracts – I get my geek on!

We don’t really work together – I work the night shift, so we see each other in passing. She is just about getting on when I am getting off. We were the first husband and wife team at SaviLinx.

What changes have you seen can buy clomid online since the company’s launch in 2013?

Obviously, we have added contracts, not just here in Maine but also in Mississippi. Another change is how many people we have in our space – we started out with 16 in a small area, and with our growth we have moved all over the facility. With our expansion, and with the type of contracts we are managing, I see a lot of growth potential. We have a great reputation, people want to work with us, and we can handle any work that comes out way. I would love to see us expand into another building with people who are just as dedicated to their job as our crews are now.

What is your favorite part of the job?

I love the challenge. I am the kind of person who will dig into something until I can’t dig anymore. I also I love the fact that we are a growing company. Granted, we get a lot put onto us, but that is part of how it goes. If you want to be the best of the best, you have to work with the best of the best. We have quite the cream of the crop with the contracts we have right now. And we have potential for more. It’s a great environment here, and if you can get your foot in the door, you are getting in with a good company at SaviLinx.

What do you do for fun?

We spend as much time as possible with the kids. We love to get in our vehicle and go – we don’t care where. We love to drive up the coast, take a road trop to Sonic and get a couple of burgers, or anything that involves family time. I’m also a fan of trying something new while cooking in the kitchen. When it comes to doing things on my own, I’m a gamer, a music lover, a horror fanatic, and a fan of karaoke.